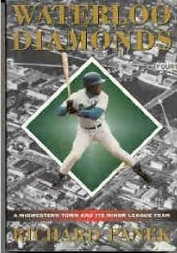 A Midwestern Town and Its Minor League Team

The 1992 season of Waterloo Professional Baseball, Inc., took shape in a room at one end of a cinder-block bunker under a concrete-and-steel grandstand. The hours the members of the front-office staff kept during the winter were business hours, and many of the tasks they performed were business tasks, but when they pulled their cars into the lot outside their place of employment under a crystalline 9 a.m. sky, or locked the office door under cover of five o'clock darkness, where they were was a ballpark. It was almost too good to be true: the candy store after closing; the amusement park in the middle of the night; the ballpark in winter.

"A winning look at the game in the heartland."

—Roger Kahn, author of The Boys of Summer

Ten Best Books of the Year

"Richard Panek has chronicled the changing face of baseball—and society—from a front-row seat."

"This is a book that one can enjoy whether one loves the game or not: Its story is told with great compassion, humor, and pathos. An elegaic paean to the innocence and charity of small communities."

"Panek concentrates on the business of minor league baseball, how it flourished into big business in the 1980s, and how it now virtually blackmails municipalities into underwriting it. This is a gritty and unsentimental portrait of the bush leagues."