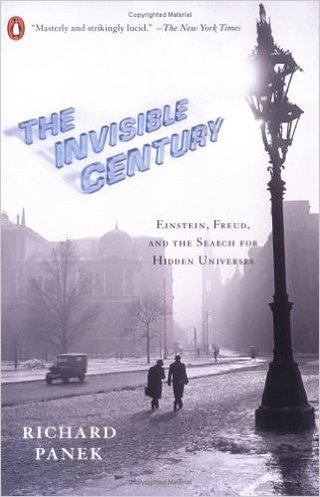 Einstein, Freud, and the Search for Hidden Universes

They met only once. During the New Year's holiday season of 1927, Albert Einstein called on Sigmund Freud, who was staying at the home of one of his sons in Berlin. Einstein, at forty-seven, was the foremost living symbol of the physical sciences, while Freud, at seventy, was his equal in the social sciences, but the evening was hardly a meeting of the minds. When a friend wrote Einsten just a few months later suggesting that he allow himself to undergo psychoanalysis, Einstein answered, "I regret that I cannot accede to your request, because I should like very much to remain in the darkness of not having been analyzed." Or, as Freud wrote to a friend regarding Einstein immediately after their meeting in Berlin, "He understands as much about psychology as I do about physics, so we had a very pleasant talk."

“Masterly. Strikingly lucid. The Einstein section is brilliant: it is the finest nontechnical presentation of general relativity I have ever read. A virtuoso feat.”

“Panek tells us how Freud and Einstein enabled modern man to rethink the way we think. Both men would have been pleased.”

"A lucid account. An enjoyable blend of theories and personalities, anecdotes and explanations, Invisiable Century places these two pioneering geniuses in a context that helps clarify the nature of their achievements."

"Richard Panek has a great command of the revolutionary thinking of Freud and Einstein, and The Invisible Century is beautifully written. It contains a better presentation of the essence of Einstein's special and general theories of relativity than any number of popular books which claim to make Einstein transparent but end up short-changing the reader."

“Besides providing valuable biographical detail about both Freud and Einstein, Panek demonstrates a wide-ranging knowledge of the development of scientific thought and philosophy, as well as the major developments in both cosmology and the study of human anatomy. There is a remarkable amount of information in this short book, and Panek's valuable thesis—that the triumph of 20th-century science was the discovery of the invisible workings of the universe and ourselves—is well made.”